I haven't written anything original for this blog for quite some time. I had just come the conclusion that there was no topic that I hadn't written about already and I was just repeating myself. I also felt like I was banging my head against a wall to no effect. I don't expect this post to be any different in regards to effect, but I did look back and realize that somehow I never tackled the confederate flag issue. So here's my two cents:

I won't go into the long and checkered history of this flag (whether it's the battle flag or the official flag or one of the designs of the official flag), because it's not really relevant to the argument. No person alive today fought for the flag, or fought under the flag or was there when the design was conceived or was there when it was first raised, so the point of what the flag actually is, is moot. The point of what the flag stands for therefore becomes the only issue worth discussing.

The idea that the flag is a benign symbol of the bravery of the confederate soldiers and a nod to the cultural significance of the southern way of life is a perfectly acceptable interpretation. There are many people who look at that flag and do not see racism or slavery or treason. Those people (and indeed any person in America) have a perfectly defensible right to display, wear, honor and treasure the flag. However, what they cannot do is deny that the flag has been co-opted by many who wish to spread hate, fear and intimidation. That is an undeniable fact.

I personally find the flag offensive. In my mind it does stand for treason, racism, slavery, hate, intimidation, murder, bigotry, violence, ignorance and all the worst characteristics of the human race. I believe that I can find more than enough evidence to support my view. The fact that hate groups all over the world have adopted the flag (including the skinheads in Germany who are not legally allowed to display the Nazi flag), is more than enough evidence for me that my understanding of what the flag represents is shared almost universally.

The questions then becomes, whose understanding of what the flag represents is more valid? The answer is really simple. They are all valid. The current debate is not over the individual interpretation of the flag. The debate is over state sponsored approval and display of that flag. While individuals can and do have their own interpretation of what the flag stands for, the state of South Carolina made it very clear as to the reason for it's entry in to the Civil War. Quoting from the South Carolina Declaration of Causes of Secession:

"These ends it endeavored to accomplish by a Federal Government, in which each State was recognized as an equal, and had separate control over its own institutions. The right of property in slaves was recognized by giving to free persons distinct political rights, by giving them the right to represent, and burthening them with direct taxes for three-fifths of their slaves; by authorizing the importation of slaves for twenty years; and by stipulating for the rendition of fugitives from labor.
We affirm that these ends for which this Government was instituted have been defeated, and the Government itself has been made destructive of them by the action of the non-slaveholding States. Those States have assume the right of deciding upon the propriety of our domestic institutions; and have denied the rights of property established in fifteen of the States and recognized by the Constitution; they have denounced as sinful the institution of slavery; they have permitted open establishment among them of societies, whose avowed object is to disturb the peace and to eloign the property of the citizens of other States. They have encouraged and assisted thousands of our slaves to leave their homes; and those who remain, have been incited by emissaries, books and pictures to servile insurrection.For twenty-five years this agitation has been steadily increasing, until it has now secured to its aid the power of the common Government. Observing the forms of the Constitution, a sectional party has found within that Article establishing the Executive Department, the means of subverting the Constitution itself. A geographical line has been drawn across the Union, and all the States north of that line have united in the election of a man to the high office of President of the United States, whose opinions and purposes are hostile to slavery. He is to be entrusted with the administration of the common Government, because he has declared that that "Government cannot endure permanently half slave, half free," and that the public mind must rest in the belief that slavery is in the course of ultimate extinction.
This sectional combination for the submersion of the Constitution, has been aided in some of the States by elevating to citizenship, persons who, by the supreme law of the land, are incapable of becoming citizens; and their votes have been used to inaugurate a new policy, hostile to the South, and destructive of its beliefs and safety."

It is very clear from this declaration that the State of South Carolina fought the Civil War because of states rights. It is also clear that the right they were fighting for was the right to own another human being. That fact is once again indisputable. The state of South Carolina engaged in treason for the purpose of being able to maintain a system in which they subjugated, terrorized, raped, abused, and enslaved an entire race of people under the protection of the law.

History, and their own words, makes it very hard for the state of South Carolina and in fact any state who was part of the confederacy to deny the reason for their entry into the Civil War. However, most of the soldiers who fought for the South in the Civil War were not slaveholders. They were mostly poor and uneducated men and boys who went into war with the thought that they were fighting for their state against a hostile attacker. The continuation of slavery was not foremost in their minds. While their lives would undoubtedly benefit from a economy based on the free labor of slaves, their day to day life would be mostly unaffected. As they saw it, they were fighting a war against tyranny. As in all wars, there was heroism and bravery on both sides. Those young men who left their homes, to fight in what they perceived as a just cause, deserve to be honored.  A few southern states do indeed honor those men with a confederate soldier day (including South Carolina).

The flag itself will always be with us and will always be a source of controversy. Our nation's history cannot be denied. My hope is that going forward that the states who took part in treason will not celebrate that history so proudly or publicly. There was honor and glory in that conflict, but that honor and glory should be reserved for the brave men who gave up their lives on the battlefield. Those men who in their moment of truths did not care about slavery or President Lincoln or President Jefferson or about maintaining the antebellum way of life, they only cared about getting back home to loved ones. Those men should have statues and monuments built to them. That is the history worth preserving.

Posted by Mycue23 at 1:24 PM No comments: Links to this post

One More Time...And Thankfully For the Last Time! 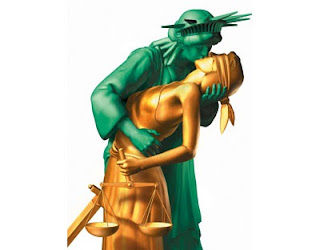 Reposting something I wrote back in November of 2008. Our nation's long national nightmare is finally over!